Latest update from the retentions regime – what you need to know

The new retentions regime for construction contracts is now in force and the Bill amending the regime becomes law.

Unfortunately, the Ministry of Business, Innovation and Employment has confirmed that no regulations will be provided. Accordingly there will be no guidance as to how certain elements of the regime will operate, leaving it up to parties to agree on these aspects in their contracts.

1. Only retention money held under commercial construction contracts entered into or renewed on or after 31 March 2017 will be subject to the retentions regime

This is a welcome development for all parties in the construction industry. Previously, there was concern that the retentions regime would apply to all construction contracts existing as at 31 March 2017 as well as those entered into after that date.

This would have had significant financial implications for those parties operating under active contracts who would have had to rearrange their financial affairs to ensure compliance with the retentions regime (many of whom would be holding multiple retention amounts for multiple parties in respect of multiple projects).

Holders of retention money will now have time to arrange their affairs and structure their contracts going forward to accommodate the regime.

2. Parties do not have to hold money “on trust” – they can obtain a “financial instrument” instead

Instead of having to put retention money “on trust”, holders can opt for an “alternative arrangement” by obtaining a “financial instrument” such as insurance, payment bonds or guarantees to provide third-party protection of retention money. There are strict requirements:

There are also certain record-keeping mechanisms in respect of these financial instruments that parties will need to comply with, including recording what amounts of money are protected by each instrument, any caps on the issuer’s liability and all information regarding the holder’s compliance with the terms of the instrument (including for example, payment of premiums).

This option will be attractive to parties who would rather pay premiums to the issuer of the financial instrument and avoid the expense and potential administrative difficulty associated with obtaining enough cash to meet the “trust” requirements. It will also allow parties to use the retention money as working capital without breaching their obligations under the regime.

3. No regulations to be prescribed

At this stage, no regulations will be prescribed to accompany the retentions regime. This means that:

Council not stuck with cost of rebuilding stadium

The Court of Appeal has found that Invercargill City Council (Council) is not liable for the cost of rebuilding Stadium Southland after its roof collapsed in 2010.

The stadium’s owners sued the Council, claiming it was negligent in issuing a Code of Compliance Certificate. The claim was successful in the High Court but failed in the Court of Appeal.

The Court of Appeal held that because the owners had engaged and relied on their own agents and experts, the Council was not liable for the defective remedial work.

The Court’s decision suggests that local authorities will have only limited liability in negligent misstatement when issuing a Code of Compliance Certificate (CCC) to commissioning owners who engage and rely on their own experts to carry out and inspect works.

The Trust’s engineer was negligent and due to his defective design, the roof of the stadium began to sag.

Stadium Southland was erected in 1999 under a project agreement between the Council and Southland Indoor Leisure Centre Charitable Trust (Trust). The Trust was established to operate and build the stadium.

The Trust’s engineer was negligent and due to his defective design, the roof of the stadium began to sag. The Trust arranged for remedial work, which was competently designed by an independent engineer. The Council consented to the remedial work but required a producer statement from the Trust’s engineer certifying the work complied with the remedial design. The Council issued a CCC before it received the engineer’s producer statement. After receiving the producer statement, the council failed to check it. It was not disputed that the issue of the CCC by the Council was negligent.

Reasoning of the Court: Council’s breach of duty did not cause the collapse

Because the case concerned negligent misstatement, the Trust had to show they had specifically relied on the Council issued CCC. They could not do so.

The Council breached its limited duty of care when it issued the CCC before seeing the producer statement because it had no way of knowing whether the work complied with the building code.

Miller J held that the Council did not have a duty to inspect the work to ensure that it complied, as built, with the building code. Rather, the Council had assumed a different and lesser responsibility: that of checking that an appropriately qualified person had supplied adequate evidence that the consent conditions had been met. The Council breached its limited duty of care when it issued the CCC before seeing the producer statement because they had no way of knowing whether the work complied with the building code.

Despite the breach, the claim failed because the Trust had relied on its own experts and agents.

Despite the breach of duty, the claim in negligent misstatement failed for want of causation because the Trust had not relied on the CCC for assurance that the work complied with the building code. Instead, it had relied on its own experts and agents.

In their separate opinion, Harrison and Cooper JJ determined that none of the elements of negligent misstatement had been made out and that no duty of care arose. The defects which caused the stadium to collapse were created solely be the negligence of the Trust’s agents, who were directly responsible for the design, construction and oversight of the original remedial work. Because of this, the Trust could not assert a separate duty of care on the Council to protect it from the same negligence and indemnify it against the same loss.

Like Miller J, their Honours determined that even if a duty of care was owed, specific reliance on the CCC had not been made out. The factual narrative suggested the Trust, as a commissioning owner, had been indifferent as to whether a CCC was issued by the Council. The Trust instead chose to rely primarily on its own architects, engineers and contractors whom it entrusted to carry out and control the remedial work.

This decision suggests that local authorities will have only limited liability when issuing Code of Compliance Certificates to owner commissioners who engage and rely on their own experts.

Substantive non-compliance with the CCA regime is not acceptable. However, minor errors can be forgiven as courts will not allow “technical quibbles” to vitiate a payment claim that substantively complies with the requirements of the CCA.

Janine Stewart and Stefan Jammes in their article review the substantive non-compliance/”technical quibble” distinction and also consider how courts have treated repeated or reissued payment claims.

The recent case of Bulmer v Envisage [2017] NZHC 318 illustrates that unless the contract clearly excludes a right to counter-claim, the court is likely to look broadly at what has occurred between the parties and reach an outcome they think is fair and just.

In 2013, the contractor (Envisage) designed and began building the Bulmers’ home. The Bulmers agreed to pay Envisage in stages. A noteworthy point about this contract was that it said that the work only had to be “95%” complete at each stage before payment was due. The Court accordingly took the view that the dispute was not governed by the Construction Contracts Act.

Anatomy of a dispute escalation 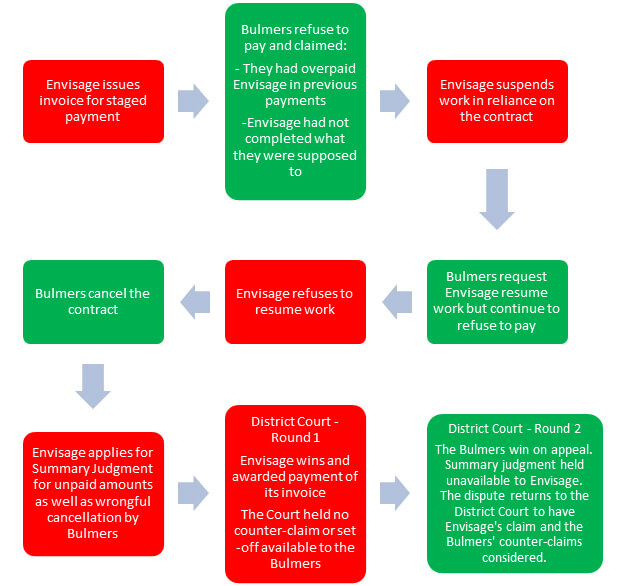 On appeal, the Court held it would be unjust for the Bulmers not to have their counter-claim arguments heard

The Court reminded us that counter-claims can be excluded (expressly or implicitly) by contract but were not here. And if parties wish to preserve the possibility of obtaining summary judgment for non-payment (even if the other party has potential or actual counter claims) they need to do this expressly or by clear implication in contract.

Urban developmet authorities (UDAs) have the potential to address a range of issues the country is grappling with and facilitate the adoption of innovative technologies, new ways of working, living and moving around.

Click here to read more in our previous article on UDAs.

Parliament has announced that the Select Committee has reported back on the long awaited reforms to the Resource Management Act 1991. The Select Committee report comes after 13 months of deliberations and four extensions to the reporting deadline.

Click here to read more in our previous article.

Given the increasing focus on time and cost-efficiency, compliance and the rise in disputes, we have noticed an increased demand for tailored training. In response, we have developed an innovative new offering for the construction industry – the Project Advisory Toolbox (PAT).

PAT provides in-house, customisable training focused specifically on your needs. You are encouraged to pick and choose training modules to suit you and your team. These modules address issues during the life cycle of a construction project, from the concept stage to the end of the limitation period in respect of latent defects.

Rather than sending individual team members to expensive training sessions facilitated by external providers, PAT is a cost-effective solution for the whole team. We can come to you, or host you in our boardroom. By defining topics of interest at the outset, we offer you specialised training on specific areas of interest.

Check out what PAT has to offer here.

If you have any queries on PAT, please contact us.

The last part of the Twin Coast Cycle Trail has opened this month. The completion of the 28km section from Okaihau to Horeke means the cycleway now stretches 84km from Opua in the Bay of Islands to South of the Hokianga.

Tauranga City Council is considering a plea to the Government for $245.6 million to help the region cope with its increasing population.

Aucklanders buy up big in Tauranga

So far, forty-five dwellings have been sold off the plans for the 71-unit Salt Residential Community development in Tauranga. Almost half of the buyers are from Auckland.

Work will soon start on strengthening the State Highway 1 Waitaki River Bridge. The works on the bridge involve seismic strengthening of the 29 pier caps and two abutments to bring them up to modern earthquake code specifications.

A new Sebel Hotel is planned to open in Manukau later this year. The six-level, 152-room hotel is the latest of a number of properties operating under the same brand.

City Rail Link is the largest infrastructure project undertaken in New Zealand to date. The project is expected to take over five years to complete and will be built within a budget agreed with the government of up to $3.4 billion.

Economists have predicted that Marlborough needs another 500 construction workers to keep up with current and future levels of demand. The problem is that there are not enough houses to accommodate them.

According to Civil Contractors New Zealand, the New Zealand construction industry will need another 30,000 workers within the next two years. The industry group has said the industry is expected to grow by 4.7 per cent by 2019.

Auckland Council’s Planning Committee has approved an overall plan for Onehunga’s regeneration. The scale of the project will be similar to other developments already underway, such as those in Wynyard Quarter and Manukau.

Sorry we couldn't find any results relating to your query.